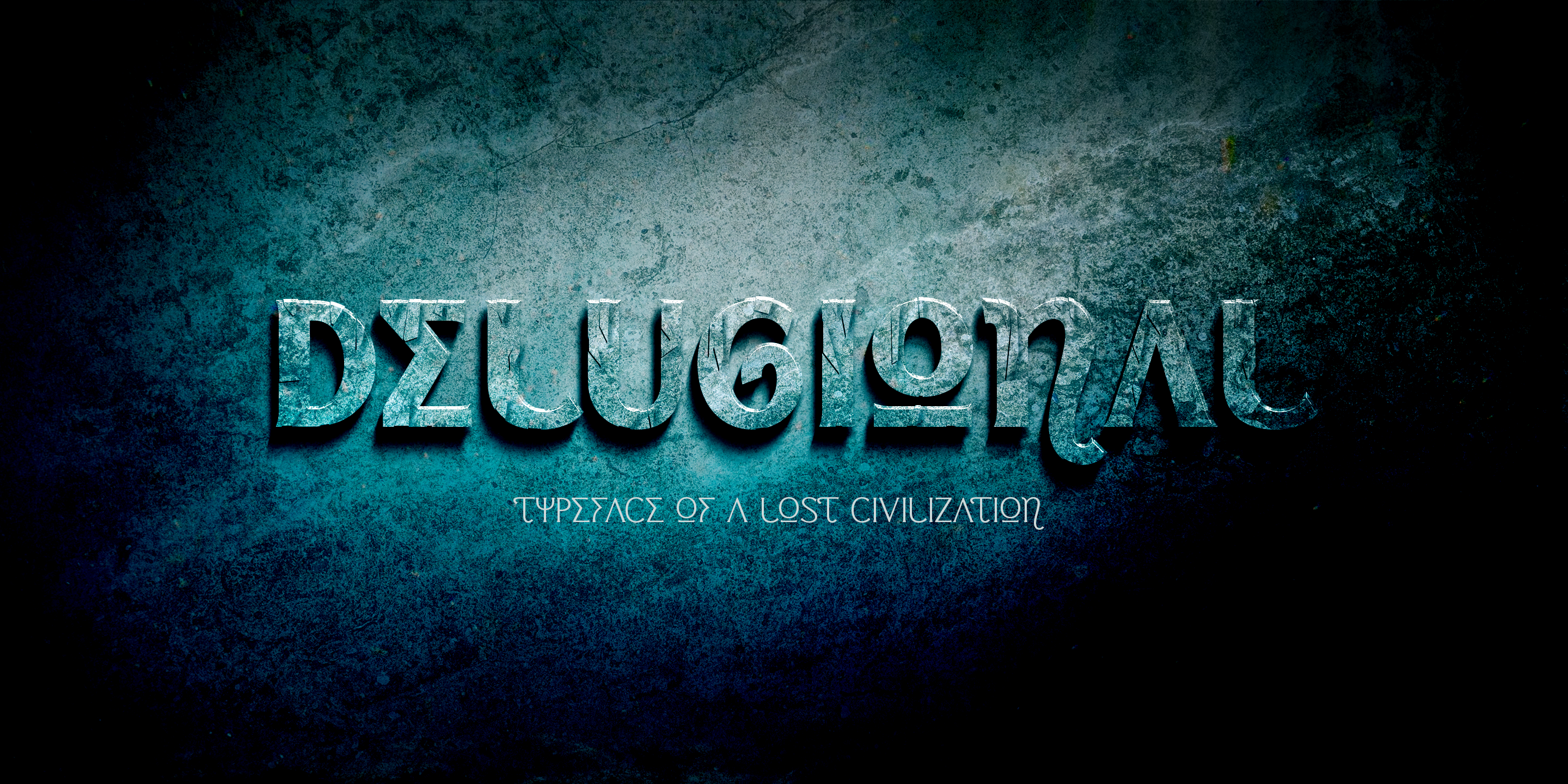 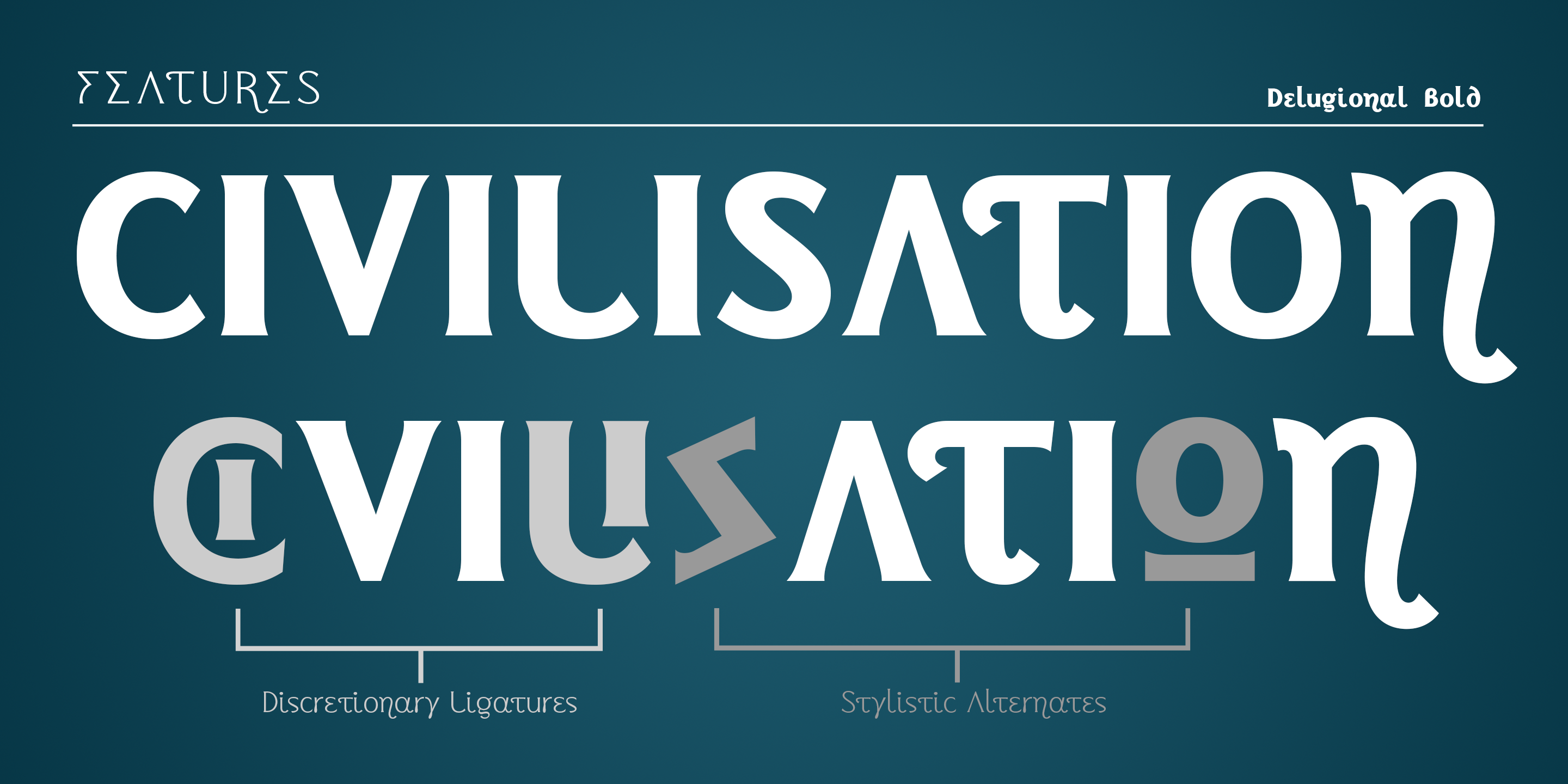 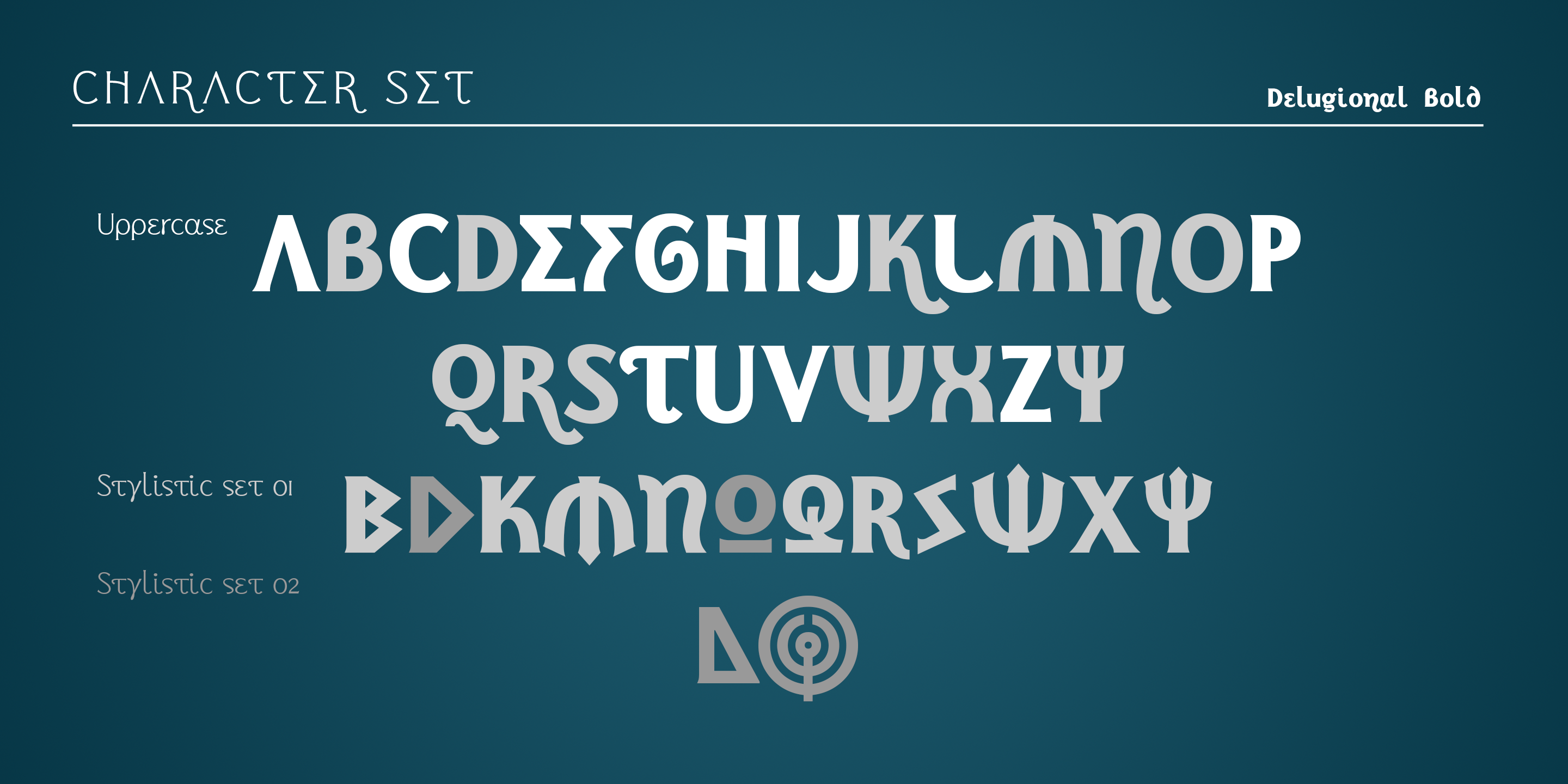 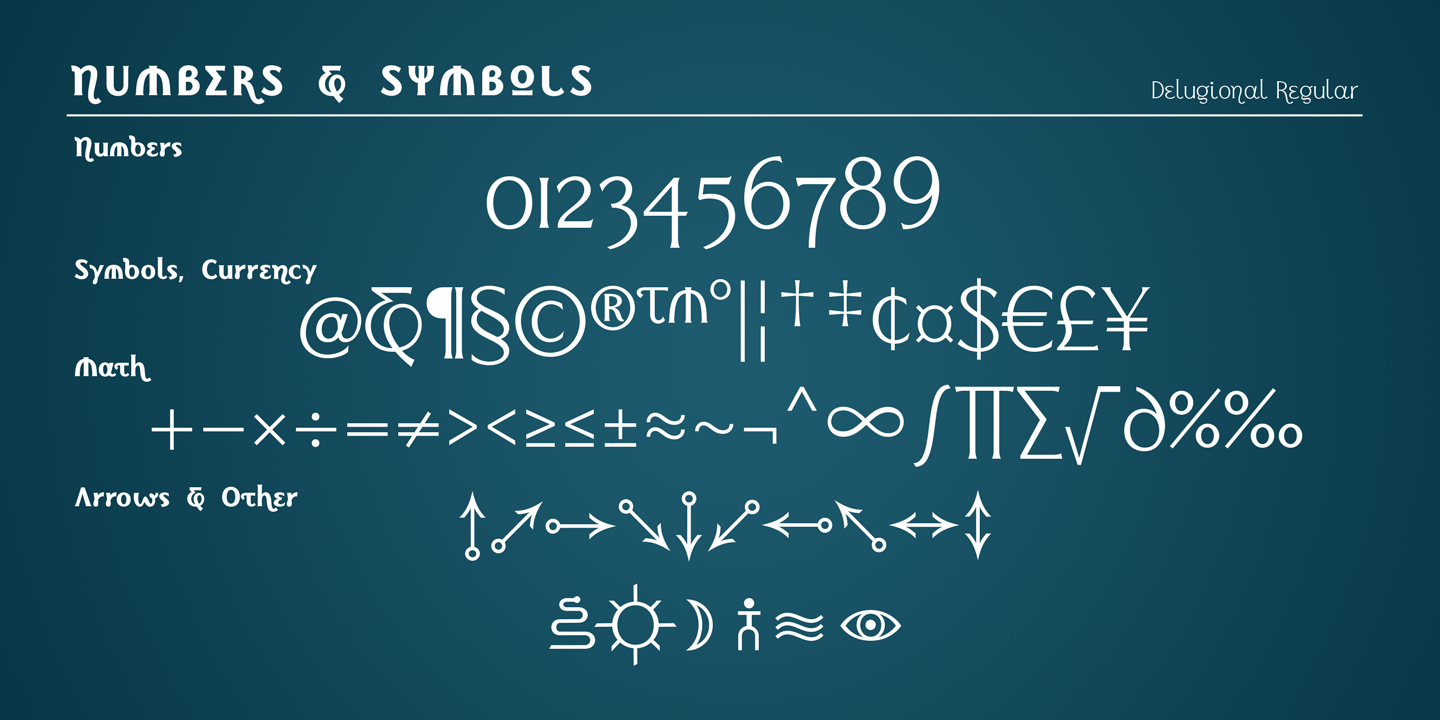 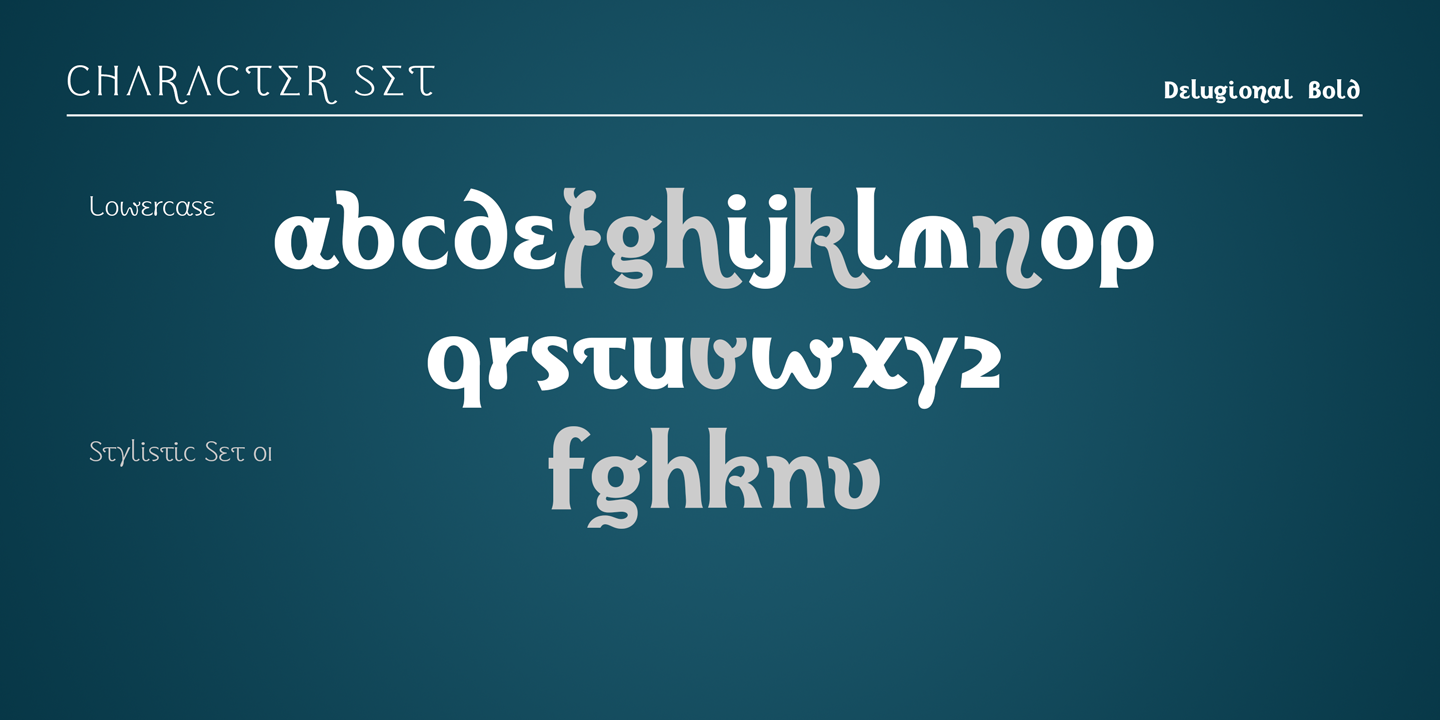 The quick brown fox jumps over the lazy dog!
Back to overview

Delugional is an Atlantis theme typeface, it’s character set is an imaginary alphabet inspired by Greek style scripts mixed with Classic Latin. This font is a display font family of two weights, Regular and Bold. It can be used for various creative/mythological and fantasy theme projects from book covers to games or movie titles. There are some OpenType features such as Stylistic Alternates and Discretionary Ligatures along with some extra symbols like sun, moon, snake and the stylised map of Atlantis in place of stylistic set 02 of uppercase “O”

I hope you enjoy this one as much as I did while creating,

Good luck with your project!

In the distant past, an advanced power so dominant, so legendary, aspired to conquer all of Greece and Egypt, indeed the entire world. This culture’s power was reflected in the naming of the Atlantic Ocean and the civilization advanced into mythical proportions.

There were no Mediterranean peoples who were beyond the reach of this mighty and dominant yet myth-laced culture, when it suddenly disappeared from the annals of history…

In a single day and night of misfortune all your warlike men in a body sank into the earth, and the island of Atlantis in like manner disappeared in the depths of the sea.”

Countless truth-seekers have endeavoured to lay claim to the discovery of Atlantis and yet, to this day, the island of Atlantis and its legendary secrets have never revealed themselves.

Photo of the Richat Structure 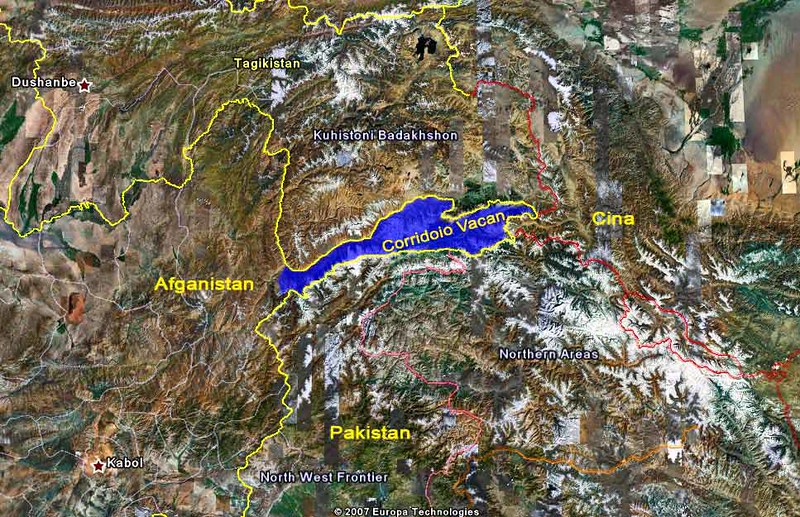 Video by Cansu from Pexels

Video by James Cheney from Pexels