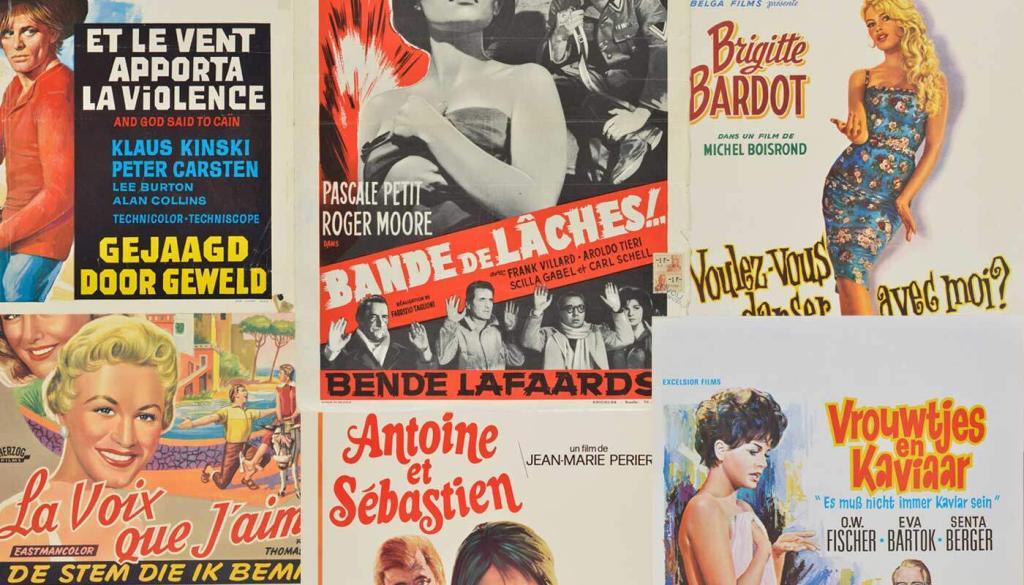 Old Belgian movie posters are a fascinating and collectible part of the history of cinema. Movie posters have been used to promote films since the early days of the film industry, and Belgian posters are known for their distinctive style and design.

One of the key characteristics of old Belgian movie posters is their use of bold, graphic design elements. Many posters from this period feature bright, eye-catching colors and strong, simple typography, which were meant to grab the attention of moviegoers and entice them to see the film.

In addition to their visual appeal, old Belgian movie posters are also notable for their use of creative and often humorous copywriting. Many posters from this period feature clever taglines and slogans that playfully tease the film’s plot or characters.

Old Belgian movie posters were also often accompanied by illustrations or photographs of the film’s stars. These images were meant to help promote the film and build anticipation for its release.

Today, old Belgian movie posters are highly sought after by collectors and film enthusiasts, and they are often considered works of art in their own right. They are a valuable part of the history of cinema and offer a unique glimpse into the world of film promotion in the past.

Characteristics of these popular posters

Belgian movie posters of American-made movies are becoming more popular with some collectors because they usually have different artwork than the American versions.

Many of the Belgian posters have a stamp, some where on either the front or the back of the poster when it. If you need more research into the Belgian censor stamps, go to our advance research website.

Since Belgium has no language of it’s own and is officially bilingual, Belgian posters usually have the title and information printed in 2 different languages, like German and French. The Belgian posters quite often have the English title printed in parentheses for American releases.

The smaller Belgian poster is quite often vertical OR horizontal.

Poster sizes matters, the most common sizes are:

Normally figured in metric so inches would be approximate.
Small size: normally 14 inches wide and the length from 19 to 22 inches. Can be horizontal or vertical. But the have a lot of variation in both the length and width. The smaller size usually has a space to theater name and show times, so it is also quite common to find them trimmed. Before 1945 they were approximately 12×17.

Large Size: approximately 33×67 – before WW2 and a rare size

Over the last few years, smaller distributors in Belgium have been using poster plates that were sent from the studios and printing them in Belgium. For example, if the film is coming from France, they may get the French plates for the Grande (47×63) and print it in Belgium to distribute. Then you would have a 47×63 French poster but it will have a Belgium printers tag. This saves money for the small distributor because he then does not have to pay for layout, drafting and artists to create the new posters and then the expense of having the plates made. So even though the printing cost may be slightly more, it eliminates all the pre-printing costs.

This means that you might see all types of sizes that are standard in other countries with a Belgium printer tag on it.

Here’s a couple of way to spot the reproductions. There are 2 markings normally found on originals:

* The phrase “Imprime en Belgique” somewhere on the poster. When a poster only has “Printed in Belgium” on it, it’s a reproduction.

* The address and/or name of the printer, sometimes with their phone number – usually on the bottom right.

* The phone number is also important. Sometimes they don’t appear on older posters but when they do, they should be 5 or 6 digits. If it’s more than that on an older poster, then it’s a reproduction.

* Reissues for American releases are fairly easy to spot, very similar to Mexican posters, the originals have the studio logos but re-issues were normally issued by a different local distributor and have their name or logo on them instead of the studio.

On newer films that have been released since 1999, quite often the distributors website is shown on the poster. The website domain extension that identifies Belgium is .be