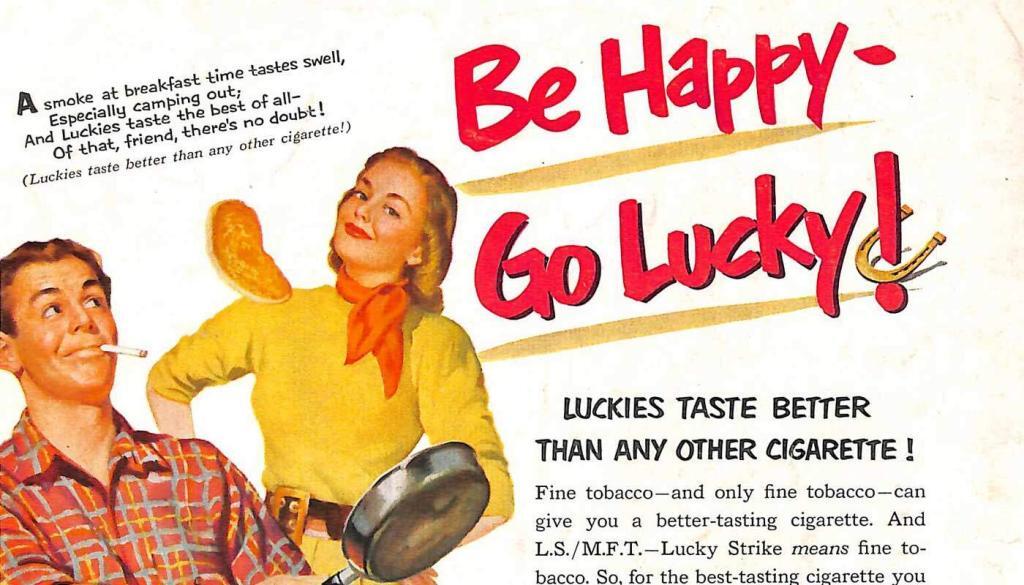 New releases
Back to overview

The History of the ‘Luckystrikes’ campaigns

The Lucky Strike cigarette brand is known for its iconic and influential advertising campaigns, which played a significant role in the company’s success in the mid-20th century. Lucky Strike was one of the leading cigarette brands in the United States during this period, and its advertising was widely recognized and remembered by consumers.

Overall, the Lucky Strike campaigns of the mid-20th century were some of the most iconic and influential in the history of advertising. They helped to establish Lucky Strike as a major player in the tobacco industry and are remembered to this day for their memorable slogans and creative approach to marketing.

About the Luckystrike Font

The Luckystrike font is based on a few characters, “Be Happy, Go Lucky”, from the old Lucky Strike advertising.

I started to complete the alphabet in the same style as the original text. Eventually, I digitized everything in order to acquire a usable and modern font to be able to use it for all graphic purposes.

The “Be Happy, Go Lucky” Campaign

This theme features Lucky Strike ads from the “Be Happy, Go Lucky!” campaign of the early 1950s and ads from British brand Kensitas, which followed with its “Kensitas – that’s good!” campaign a year later. These ads are appealing to people of all ages, especially teens and young adults, with their vibrant colors, youthful models, fun fonts, and carefree messages.

From 1935 to 1959, Lucky Strike sponsored a popular radio show and subsequent TV show, Your Hit Parade, which associated Lucky Strike cigarettes and smoking with fun, music, dancing, and friends. Your Hit Parade featured popular songs and musicians of the day alongside copious advertisements for the cigarette brand. When the show first aired on television, the program opened up with the following Lucky Strike jingle composed by Raymond Scott:

At the same time, Lucky Strike began rolling out print advertisements in popular magazines bearing the “Be Happy, Go Lucky” slogan. This followed on the heels of the 1949 campaign, “Smoke a Lucky to Feel Your Level Best!” Both slogans suggested that smoking Luckies resulted in emotional and physical benefits, and both campaigns were colorful and youthful, featuring young, predominantly female models having the times of their lives. These ads presented Lucky smokers as young, attractive, vibrant, athletic, happy, and full of vitality. Without claiming health benefits outright, Lucky Strike portrayed its brand as healthy and enticing through these campaigns.