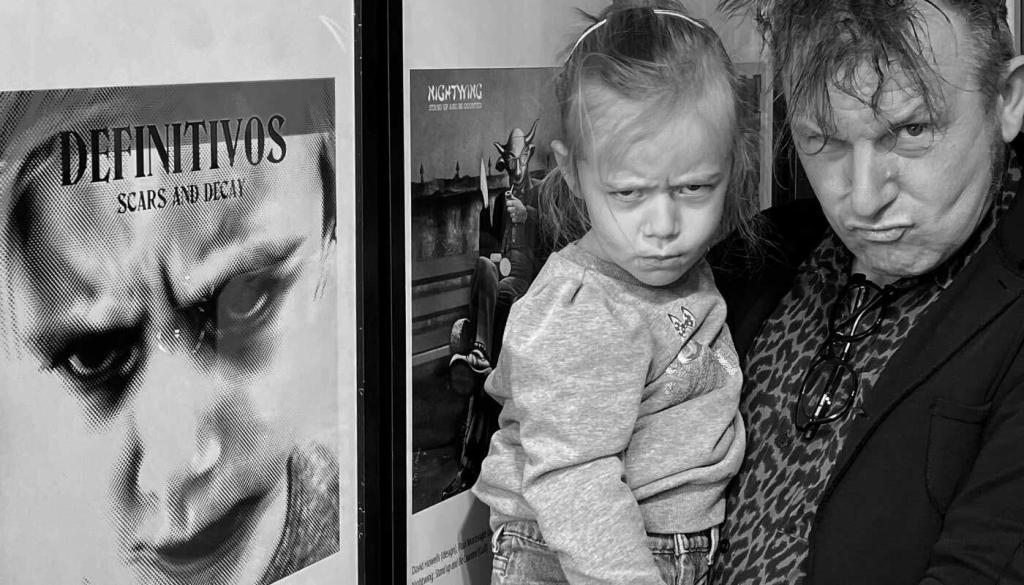 Exhibitions
Back to overview

The record sleeve is a small, printed square with a side of just over 30 centimeters—small in area but big in heart, so much so that some fans frame their favorite covers, creating a veritable gallery where they can already hear their favorite songs at a glance. The graphic designer who comes up with a record cover has an advantage over the visual artist, who is subject to the unspoken prejudices of galleries and museums, because the boundless creativity of cover art, a genre that is humble and modest, young, fresh, and uninhibited if not imaginative, does not have the challenge of measuring up to the weight of art history.

And what if some of the art, peculiar to our times, were available to all for free in the bins of record stores? Between the 78-rpm record and the compact disc lie the 1960s, 1970s, and 1980s. Vinyl records and their most striking covers date from this blessed period and amply justify the nuance of millennials . All the generosity of the world was directed toward the baby boomers. It was a time of creative release. It was a time when the most inventive images transcended the image of music.

Starting in the early 1990s, vinyl was relegated to the shelf of relics. It was reduced to compact discs before evaporating into streaming. The ’60s, ’70s, and ’80s were three glorious decades of all experimentation, of all genres, both musical and graphic. So it is necessary to appeal to the talent of individual designers to bring the image back into music. That is what this exhibition shows.

Our exhibitions are exclusively for illustration professionals, graphic designers and cartoonists, who give their views on the theme. Past exhibitions can be viewed at The Seedfactory and at The Brusseler

Between the 78-rpm record and the compact disc lie the 1960s, 1970s, and 1980s: three important decades in this exhibition dedicated to the image in music. The vinyl records and their most striking covers date from this blessed period and amply justify the offense of the millennials. Indeed, all the generosity in the world was aimed at the baby boomers.

On top of that, the golden sixties with their material and spiritual benefits were not the merit of these happy war children. It was a time of unprecedented creative drift. And, to make our point, it was the time when the most inventive images enhanced the image of music. Time defines genres, each decade creating its own identity.

The 1950s dwelled on war children becoming teenagers. They were the complicit witnesses of a diabolical birth, that of rock. At the baptismal font of gospel, the marriage of rhythm and blues with country created an overwhelming tidal wave. It long associated crime with a youth hungry for everything. In a flash, rock intruded with its codex and its myths. But it was too early for a real visual culture in this radical subculture of the second half of the last century.

The 1960s were the years of war—the distant war in Vietnam, the nearby war on campuses. Youth was “awake,” but this term would not appear until half a century later. Woodstock was an apotheosis. At the top of the charts: Dylan, the Stones, the Beatles, the latter being the British shock troops. This time, everything took place in the old Anglo-Saxon world. American artists were crossing the Atlantic. In the US, the psychedelic wave was both a musical and graphic explosion using hallucinogens. The covers were hypnotic. The hallucinated and indecipherable typography indicated an approaching end of life. In rock, people died young and in a stupor.

In the 1970s, the big bands disintegrated. No longer a matter of rebellion, people were mainly interested in themselves. The music scene was multipolar. Young people wanted everything at once: glam rock, punk, jazz rock, electronic sound, disco, and big heavy metal get-togethers. Pink Floyd floated in this vibrant diversity and became the founder of contemporary music. David Bowie traversed the three decades, capturing all facets of rock all by himself.

In the 1980s, music was a mega-industry that continuously generated stars, only to later devour them. Rock stars were dropping like flies, but rock was doing well; it had become decent. Techno was on the rise. Covers of vinyl records were ubiquitous, while TV channels were emerging where music was played continuously, in an orgy of graphics and rhythm. The demiurge Jean-Paul Goude invented the image of Grace Jones. Klaus Nomi was the Cerberus of his own look; he was a comet who introduced opera to the new wave, a decadence that pushed the fusion of the artist and his image to the limit.

From the early 1990s, the vinyl record was relegated to the relics. It was reduced to the compact disc before evaporating into streaming. Having been the subject of the best graphic creations, the musician frees himself from them; the realism of his portrait suffices for him. The 1960s, 1970s, and 1980s were three glorious decades, those of all experiments, all genres, both musical and graphic. It is therefore necessary to rely on the talent of individual creators to bring the image of music back into its own. That, then, is what this exhibition shows.

The vinyl record sleeve is a small, printed square with a side of just over 30 centimeters. Sometimes, but rarely and more expensively, it becomes an object in itself in which the author attempts the unusual—who does not remember the cover with trousers, fitted with a real zip, for Sticky Fingers by the Rolling Stones, devised by Andy Warhol? The cover’s function is simple: to attract attention.

As in any advertising, seduction is used as a means of eliciting emotional behavior aimed at purchase. Fortunately, the music market rarely entrusts this mission to recognised but perhaps not passionate sales professionals, for whom a bar of soap is equivalent to a car or a biscuit.

The record industry has understood that the surprise brought about by the achievements of graphic artists must be matched by those of musical artists, without there necessarily being a similarity between the two languages. In practice, the musician usually chooses a kind of graphic design with which he feels an intuitive complicity. As for the graphic designer, since his work is distributed in several thousand copies, for a highly valued product, among a benevolent audience, he gives his full effort and enthusiasm to it.

The author of a record cover has another advantage over the visual artist who is subject to the unspoken prejudices of classical galleries and museums, for the boundless creativity of cover art, a genre that is humble and unassuming, young, fresh, candid if not imaginative, does not know the challenge of measuring up to the weight of art history.

And so what if some contemporary art is available to all for free in the bins of record shops?